The pictures speak for themselves. Thanks for coming out, we had a great time.

We thank Soho Estates for hosting at Ilona Rose House & SOLA for the amazing canapés.

The Resident and Business Liaison team will be in your area on Parade Day and, alongside the Metropolitan Police and Westminster City Council, will be available to field any last-minute issues that may come up. If you have any unexpected disruption in the area of your business, please contact our Event Liaison Team for Pride in London by calling the following number: 0204 576 9744 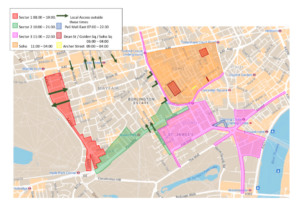 On the 7th of June we met at Ritas on Lexington.

Our guest speakers from Shelley Sandzer, Victoria Oats and Richard Thomas held a spirited conversation in the beautiful garden behind Rita's.

We compliment Rita's on their great food and welcoming atmosphere and thank everyone who attended and shared and learnt more.

Over the last months various events have helped to raise over £28,000 with the support of members of the Soho Business Alliance.

£20,675 was raised by Zima, for the Red Cross in Support of Ukrainian Refugees.

A further £28,330 was raised by creating an auction with George of the Soho Whisky Club to help Together for Ukraine, an initiative set up by the President of the City of Przemyśl, Wojciech Bakun.

The response to a request for donations, from members of The Soho Business Alliance and the whisky trade alike, was tremendous. We are thankful to all who donated and bid.

To act as a unified voice for all businesses in Soho, with the aim of protecting and growing the economic diversity of the area in which we do business, through engaging with each other, our residents, other amenity groups and the Westminster City Council, thereby protecting its unique character.

There are lots of good reasons to join Soho Business Alliance!

Just £25 a month gives you all these benefits and more:

SBA is proud to be supported by Soho's very best businesses, products and brands. Thank you.